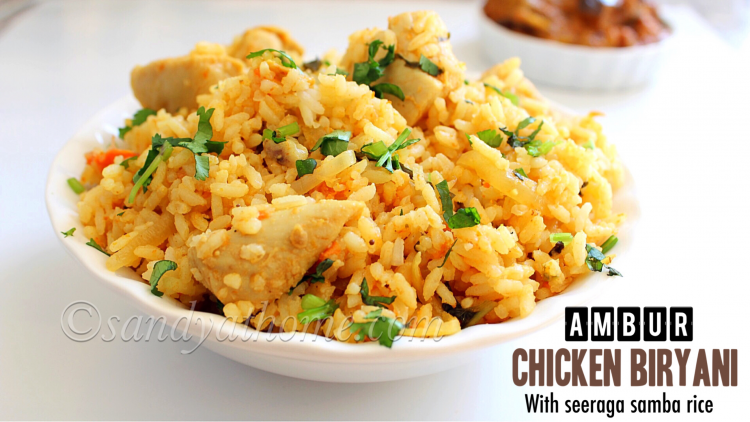 Ambur chicken biryani is one such delicious and lip smacking biryani that has its own distinct flavors and cooking method where taste is overloaded due to slight variation in the ingredient list which makes it stand out among other biryani. Ambur biryani came to my notice only after I got married as I am from a brahmin family. Since my hubby’s hometown is near ambur I got chance to taste this yummy biryani which was tough to adapt in the initial stage but later relished it. I have heard him say about its specialty a lot of time and I tried making only once which I completely forgot about too. I got this recipe from a dearing friend of mine shruthi who posted this lovely biryani pic of her version in fb and was so tempted to make it the same day. It turned out well but only error I found in my making was soaking seeraga samba rice was a bad idea as the rice lost its texture a little bit, which I corrected in my green egg biryani, otherwise everything is very easy to make and has a restaurant touch to this recipe. The important reason behind its taste is the use of seeraga samba rice (short grain rice) which has its own flavors and creates magic in the dish, also the non usage of green chilli and chilli powder in the recipe which is replaced with red chilli paste for which I have added recipe and the making too. Its immense spiciness and flavors takes this biryani to a new level I should say. For the below recipe I used chicken breast which can be replaced with any chicken piece pf your choice, also you can alter the level of spiciness accordingly. So lets get to the making!