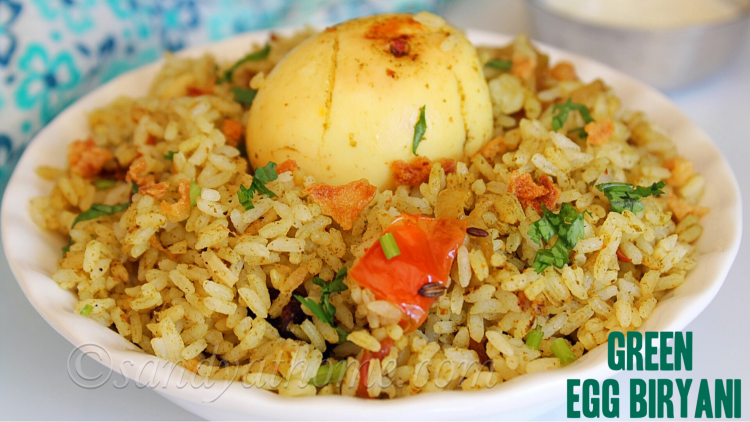 Green egg biryani is spicy, flavorful and very aromatic biryani prepared using traditional seeraga samba rice which is very famous in Tamil Nadu for preparing biryani. The biryani prepared with this small rice variety is very tasty as the rice its has its own flavors and taste. Green egg biryani appears green in color as the name goes and is also prepared with 2 greens namely mint and cilantro which acts as the key paste and ingredients to its deliciousness. Also there is no chilli powder in this recipe and the spiciness comes only from the green chilli.

Its been 5 years since I made any rice recipe using seeraga samba rice as it always turned flop earlier as the got little soggy, now after 5 years corrected my mistake and this method resulted in perfectly cooked rice. This time I dint soak rice and just after washing it I added to the boiling water, also I made this rice in dum style which helped each grain absorb the flavor from the gravy.

Shruthi dear thank you very much for this beautiful recipe and everyone loved it. So lets get to the making! How to make green egg biryani with step by step images